September 16, 2013 - Markets up on Syria Resolution and Tape

Tensions over Syria have decreased significantly as the U.S. and Russia agreed on a proposal to eliminate Syria's chemical weapons arsenal, avoiding the immediate need for military intervention. While there are many technical issues to explore, investors reacted with relief to the news that military action may be unnecessary.[2]

Economic data was a mixed bag last week. Consumer sentiment dropped sharply to a five-month low in September as higher interest rates took a bite out of confidence. Americans are worried that rising rates will put a damper on the housing market and cool economic growth. Respondents were also apprehensive about the Fed's fiscal policy and the effect it will have on the job market.[3] Although demand for big-ticket items expanded, retail sales rose less than expected in August as Americans cut back on purchases of clothing, sports equipment, and other items. Retail sales grew only 0.2% instead of the 0.4% that economists had expected. This report captured part of the back-to-school shopping season, the second largest of the year, and shows that third quarter economic growth may be slowing down.[4] On the other hand, the fact that Americans are still making major purchases of automobiles and appliances suggests that there is still hope for the all-important holiday shopping season.

Months of anticipation will finally come to a head this week at the Fed FOMC meeting on Tuesday and Wednesday. The Fed will make its formal announcement on Wednesday afternoon and Fed Chairman Ben Bernanke will give additional details in his follow-up speech. The Fed has telegraphed its intentions to taper, but investors have convinced themselves that we're looking at "tapering light," i.e. a cut of $10 billion or so in Treasury purchases and this is already priced into the market. Recent economic data has been mixed, leading analysts to believe that any tapering will be modest in scope. However, stocks are already close to historic highs and volatility is currently low, meaning that any surprises could spook markets into a selloff. As always, we'll continue to monitor the situation and keep you informed. 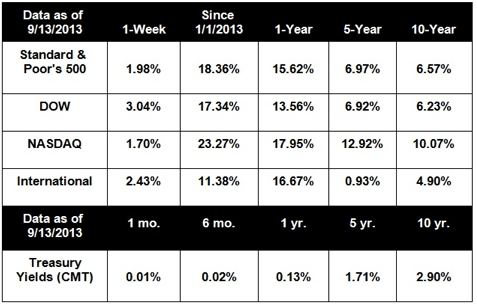 Notes: All index returns exclude reinvested dividends, and the 5-year and 10-year returns are annualized. Sources: Yahoo! Finance and Treasury.gov. International performance is represented by the MSCI EAFE Index. Past performance is no guarantee of future results. Indices are unmanaged and cannot be invested into directly.

Oil prices fall on Syria deal. After fears of an imminent crisis pushed crude oil prices above $117, news of a diplomatic solution brought prices back down to earth. Weak global demand also exerted a downward pull on prices, bringing them near $108.[5]

California approves $10 minimum wage. In a move supported by low-wage workers, lawmakers approved a measure that would raise the state's minimum wage from $8 to $9 in July 2014, and to $10 by 2016. The current highest state minimum wage is $9.19 in Washington state.[6]

China data points to economic rebound. Industrial output, investment, and retail sales all strengthened in August in the world's second-largest economy. These new results suggest that the Chinese economy has rebounded after a shaky first half of 2013. However, too much reliance on domestic investment and debt could threaten long-term prosperity.[7]

Fewer homes enter foreclosure in August. The number of houses entering foreclosure proceedings fell to the lowest level in eight years in August, down 44% from the year before. The national slowdown in foreclosures reflects an improving housing market, steady job growth, and fewer defaulted loans.[8]